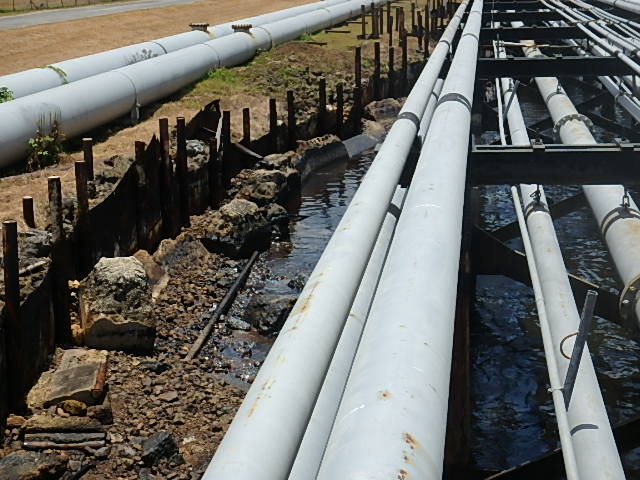 Petrotrin Oil Spill- An Accident or a Time Bomb?

Fishermen and Friends of the Sea (FFOS) investigations have uncovered that workers and management knew that Tank #70 (known as T70) had a small leak at the bottom of the tank… since 2003!
FFOS have in hand this official 2003 report which states clearly that T70 as well as several other known tanks on this facility are at risk of rupturing if not repaired.

FFOS has been informed that T70 contained 150,000 barrels of fuel oil which contains high levels Silica, Vanadium, Nickel, and Nitrogen some which are heavy metals and are toxic contaminants. The tank is improperly cited near to the San Fernando General Hospital and near the shoreline.

Today Petrotrin reported 300barrels (126000 gallons) of oil was spilt. Tank #70 has a capacity of 150,000 barrels and our reports are that it was full. Therefore where is the balance of 149, 700 barrels the oil is the tank ruptured at the bottom? Wouldn’t the entire content of the tank be spilt? Is Petrotrin downplaying this national disaster? Do Petrotrin have a motive to falsify the truth? Who is checking?

Are there any high priority protocols and procedures for reporting risks?
The 2003 report stated that “if nothing would be done on T70 in the next two years, it is quite possible that this tank will rupture at the bottom of the annular ring and empty into the sea”. In the risk assessment, T70 would empty in a short period of time and travel down-hill and reach the sea. This same scenario has actually occurred in 1985 on T72 which at that time was in similar condition as T70. Hasn’t Petrotrin learned from their mistakes? Why are present and former Ministers of Government keeping secrets from a public who are being unknowingly being put at risk?

It is factual to say that workers and management knew that T70 had the deficiencies such as 1. the concrete ring beam failed and displaced outwards, 2. the “tank pad was very poor” and 3. “annular plate edge too narrow and badly corroded”. Due to the increased stresses on the annular seams, there was a small leak at the bottom of the tank. Petrotrin staff including senior management was engaged in the tank assessment exercise, ongoing discussions as well as a workshop for inspection personnel and yet … ABSOLUTELY NOTHING WAS DONE! These persons are well known in Petrotrin. FFOS is in possession of these names and will not yet reveal the names of these senior Petrotrin staff, but why are they still holding their positions when they have displayed total negligence of duty, and complete disregard for human life and public safety?
Today these same OWTU workers and managers continue to work at these same failing facilities even though they are solely responsible for these ongoing and dangerous disasters. Senior workers and managers of Petrotrin had knowledge of this risk for 14 years and did nothing! Yet no one is being held accountable and so over and over month after month public health is compromised while the Minister after Minister smiles at a napping Parliament.
This begs the question, out of the 122 tanks in the tank field which other tanks are vulnerable? Are the same managers who managed T70 also managing the other 121 tanks?
OSHA officers must not be left out. They have a specific responsibility to inspect the tanks and certify its safety. Where is the OSHA report on T70? Has this report been conveniently misplaced or buried?
Public safety must never become a private matter. Why is there no law that forces public and private officers to maintain reports on file and to make these reports available to the public especially when these disasters occur? Our Nation should not worry, we should panic!
Every time there is an oil spill, a cosmetic clean up occurs and they pretend that the problem is solved. The problem is never solved because the cause of the problem has never been addressed. This is evident by the continuous oil spills occurring almost monthly in the Gulf of Paria and the south west peninsula.
Our Honourable Government must stop playing games. Dr Rowley must puts his feet down and

Unless the Government overhauls itself and the best persons are selected regardless of race, sex, age or political suasion, our failing State owned sector will continue to hang us all with a bankrupt rope around our suffocating necks.