The Fight for the Invaders Bay Mangrove Swamp

Understanding that all our ecosystems are interdependent and interconnected, Fishermen and Friends of the Sea have continuously advocated for the protection of not only our oceans, but our terrestrial habitats as well. In 2000 FFOS partnered with activists from all over the country to stage a protest camp for the protection of one of our most fertile ecosystems, our mangrove swamps. Read the article published on July 23rd, 2000, by Kim Johnson: Gary Aboud, environment warrior 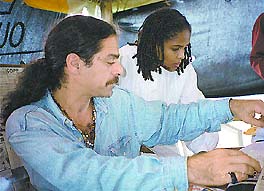 Battle to save Invaders Bay

EVEN without a crowd the protest camp outside the Stadium on Friday mid-morning was frantic.

Dawn Foderingham from Care — Citizens Against Rape of the Ecosystem — is rifling through the confusion on an old writing desk for a missing petition sheet. Two men with a sheet of black cloth struggle to block the rain from blowing under the two rent-a-tents.

Gary Aboud, the inspiration behind Fishermen and Friends of the Sea, scrabble about for his glasses, lost since last night. Conversation with him is difficult, continuously interrupted by more pressing needs.

“This fight goes back to 1996. That October we started. The State appointed a Stakeholders’ Committee and we were on it for all sea sustainability issues,” he explains.

“Our submission was based on detailed research. We used to think that it was only shrimp trawlers were destroying our fisheries, but five other causes came up, including the lack of policy about the removal of mangrove, its protection or regeneration.”

Conditions in the camp are rudimentary. Plastic chairs, two old mattresses on bricks and boards. Piles of leaflets, documents, reports, notebooks and newspaper clippings litter the tiny desk. A notice board is covered with the organisation’s correspondence, flyers, maps, aerial photos of fish kills.

Propane cylinders and a burner occupy the far end of the tent, for the group has held a 24-hour vigil protesting the destruction of Invaders Bay since Thursday before last.

“We believe we have the nation’s support,” says Aboud. “We’ve had 84 meetings, each with at least four persons and some with up to 150. Most are between ten and 30.”

His friends are drafted in to spend nights. The YMCA is there too, and some trade unions are beginning to lend their weight to the cause. CWU holds the fort on Mondays. Their petition already has over 2,000 signatures, plus several hundred which came via e-mail.

“We want to go out and collect more signatures at the game, inside and outside, so we need volunteers,” he says. “What we got so far is just from people stopping.”

As if to confirm it, a tall middle-aged woman pulls off the highway and walks over to the tent to sign. She shunts the conversation to what Housing Minister John Humphrey said that morning on TV about his plans for the foreshore. “It’s disgusting!” she says, “And it goes all the way to Sea Lots.”

At 41, Aboud looks very much the environmental warrior: ponytailed, hirsute, like a refugee from the 1960s. He speaks in a soft, almost pleading tone, but his arguments pour out like a deluge, breathlessly reciting the many national and international dimensions of environmental protection.

The sense of obsession isn’t surprising either. A well-off member of the Syrian-Lebanese community—Aboud lacks the aggressiveness of, say, Mighty Trini. Accordingly, his love of the country is oblique.

The second to last of “textile king” Jimmy Aboud’s five children, he’s the proprietor of Mode-Alive, the Frederick Street fabric store in the old Singer mall. There, in addition to the bolts of cloth, all of which are on shelves of recycled wood, you’ll find drums and a range of local handicrafts on sale—only sustainable materials, though. No shell jewelry, for instance.

Two dozen animal motifs are cast into the terrazzo floor.

Aboud studied at St Mary’s and then proceeded to the University of Western Ontario where he studied political sociology and philosophy. In his third year, on December 22, 1977, disaster struck: his father’s business was fire bombed. That same night Aboud’s apartment in Toronto was burnt. He surmises that his father had been confused with another Syrian businessman.

Aboud’s grandmother was a Sabga. His grandfather had been persecuted by the Turks. He lost an eye and was shot in the knee before fleeing to Trinidad to sell haberdashery.

He’d walk for days in the countryside, selling by installments, begging a shelter when night fell, or sleeping rough with his bundle for a pillow. His son Jimmy began working as a child.

When the business was burnt Aboud returned home to work with his father. Weekends he fished, observing the decline of the fisheries. By the mid-80s he took to complaining to the press, and in 1989 legislation was passed banning shrimp trawlers from the North Coast.

After nearly 20 years working with his father Aboud took a year off, hiking in the bush, fishing, liming on the beaches, nurturing ideas of becoming a nature guide.

Aboud attended an eco-tourism course at George Washington University in 1996. Back home on the beaches later that year, one day he saw shrimp trawlers in Las Cuevas.

The police were there too, and Aboud angrily pointed out it was against the law. The officer replied that he only handled lawbreaking on land.

An old man advised Aboud he was wasting time. The fishermen had been complaining for years.

They talked, and out of that came the idea of Fishermen and Friends of the Sea. Public meetings at Maracas, Blanchisseuse, La Filette followed, letters were written, petitions sent to the government.

In 1997 Mode-Alive was established. Although his father had spoken out some years ago on behalf of street vendors when the government was harassing them, Jimmy Aboud generally steered clear of politics.

“I wanted to be independent so I could speak out about things,” explains Aboud.

And the passing drivers who blow their horns at all hours of the day or night are saying that he’s speaking for them too.

A bay worth fighting for

INVADERS BAY, a small mangrove swamp South of the Mucurapo Foreshore Highway where, two centuries ago, Sir Ralph Abercromby landed to take the island for Britain, is being filled in as part of a grand 15-year plan to expand Port of Spain.

The development will stretch from Cocorite to the Barataria roundabout. Environmental groups are deeply critical of the project, though, arguing that it is contrary to legal and environmental procedures and even Government policy.

The work has been started without Town and Country approval, and the 1998 report on mangrove restoration has been ignored.

The plan was produced by a 1999 Government-appointed West Coast Committee, and has not had a specific Environmental Impact Assessment (EIA) done.

An earlier EIA on the dredging of the harbour recommended the dredged seabed be dumped at Invaders Bay for increased container storage.

The reclaimed land will be given to the Urban Development Corporation of Trinidad and Tobago to sell to private developers.

The head of Cope— the Council of Presidents of the Environment, which includes 14 NGOs — wrote the Port Authority General Manager to argue:

“Mangrove restoration is critical to the stability of the area and coastline. Mangrove protects the coastline, absorbs pollution, offers income, protects the livelihood of fisher folk and protects crucial wetland linkages for our rich biodiversity.”