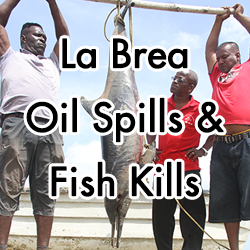 Fishermen and Friends of the Sea (FFOS) Response to the July, 2016 Joint Press Release by The Environmental Management Authority (EMA) And The Institute Of Marine Affairs (IMA): “Investigation Into Gulf Of Paria Fish Kills Continues”.

We understand better than anyone the on-going plight of fisher folk in this country, the vast majority of our members being lifelong fishermen and fisherwomen. Knowing our members economic dependence on the fishery we take the on-going fish kills very seriously.

In December of 2013 State-owned oil giant Petrotrin had a series of oil spills. Since then FFOS has been raising the issue of the daily fish deaths in the specific areas where various unknown chemicals were used in response to the spills. We have disseminated video and photographic evidence numerous times clearly showing that the spill was not properly cleaned up, the chemicals used in the clean-up were not properly administered, and the area is still suffering the effects. We have never stopped asking that the authorities keep investigating the exact cause of the on-going fish kills.
On numerous occasions FFOS has provided samples for the EMA and the IMA to test – fish, crabs, shark, pelicans, and bottle nose dolphins – yet we have never received a single report, or even a definitive answer. Instead of investigating the cause, the EMA and IMA have repeatedly blamed the very people being most affected by this disaster (struggling fisher folk), by repeatedly claiming that the cause is and has always been low value fish being dumped by fishermen. This is unverified and misleading.
FFOS openly refute and challenge this nebulous claim based on the following observations:-
 Every-time the rains come heavily, the quantity of dying fish increases. There is an observed correlation between heavy rains and accelerated fish kills.

 By-catch discards when found, are normally already decomposing. Most of the fish washing ashore daily in La Brea are perfectly fresh fish, some are even still alive. We have repeatedly filmed fish and even pelicans (still alive) on the shoreline, behaving as if sick or poisoned, and dying on the beach in front of us.

 The size of the fish and wide variety of commercial species – often commercially valuable and fresh fish species – washing ashore is contradictory to what would be expected of by-catch discard. Why would fishers discard millions of dollars of valuable fish?

 Since the fish kills began in December 2013, FFOS has observed, quite literally, tens of thousands of dead and dying fish, pelicans, corbeaux and flipper dolphins washing ashore, and these creatures have never had net marks characteristic of by-catch discard.

 The volume of dead fish observed on July 25th 2016 would require an exceptionally large fleet of vessels to accomplish.

 The hypothesis of dumped fish does not make logical sense; the primary stakeholders in the area have complained of low catch rates (the high price of fish can attest to this), why then would they dump their hard earned catch?

 By-catch would not have the red marks and lesions similar to the blood vessel ruptures observed under the skin of fish poisoned by chemicals such as Corexit, and would not wash ashore still alive. Almost all the mullet and herring which were observed have burst blood vessels under their scales or in the area of their eyes.

FFOS privately contracted laboratories to test the area, looking first for Corexit, the cause which seemed most likely to us since the fish have been dying only in this Corexit contaminated area.
After 3 years of claiming every fish kill event was fish dumped by fishermen, the day after we begin our tests (and before receiving any word on the results) the EMA and IMA released a joint media release stating that they have been using the same lab that we are using (CARIRI) and have been investigating the areas we have outlined all along, the very thing we have been calling on them to do for years!
These government-commissioned investigations have been done unbeknownst to and without consulting any primary stakeholders. The result from the EMA/IMA report where samples were allegedly taken on July 21st 2016, and where the findings are released on July 26th states that “all body systems examined appeared grossly normal” with “no gross lesions” on the fish carcasses.” Additionally, the EMA and IMA claim that the definitive cause of the on-going fish kills though still unknown, cannot be the Corexit which Petrotrin used in the area for its oil spill clean-up.

In response to this joint statement released by the learned chairman of the EMA, Mrs Nadra Nathai-Gyan, FFOS wish to respond as follows:
Why has Mrs. Nathai-Gyan omitted to mention the method employed by CARIRI to do the testing? From our research the Fourier Transfer Infrared Spectroscopy (FTIR) Analysis will not detect dissolved or broken down Corexit. It will only detect the Corexit if it is pure and has not
been degraded and/or dissolved by the elements. The Corexit has been dissolved; therefore the FTIR will not show Corexit. It does not mean however that the Corexit is not present, it may simply be dissolved.
What is the detection limit for the testing methodology used? Is it in parts per million (ppm) or in parts per billion (ppb)? If the High Pressure Liquid Chromography (HPLC) Analysis was used without the Mass Selection Detection (MSD) then the dissolved Corexit would appear not to exist.
Therefore our claims have not been refuted until we can analyse the specific methodology and results first hand.
Why has Mrs. Nathai-Gyan omitted and can she verify by sharing the signed “chain of custody” which shows where, when and by whom the samples were in fact taken. Where are the GPS readings of the locations where the samples were allegedly taken?
When we contracted CARIRI we were forced to comply with specific requirements which would verify the integrity of the samplers and the samples taken. Eye witness fisher folk reports to us have stated that the EMA’s samples were taken inside and upstream of the Godineau River which is outside of the Petrotrin prohibited “Red Zone”.
Finally we state as follows:
1) Every day fish since December 17th 2013 fish, dolphins, pelicans and corbeaux have been washing ashore dead or dying in this Petrotrin prohibited “Red Zone” area.

2) Petrotrin designated this prohibited “red zone” themselves, after dead fish began washing ashore. What guided Petrotrin to lift the ban in the “Red Zone”?

3) This phenomenon has never occurred in this area before the oil spill; no dolphins, no pelicans, no corbeaux, no ospreys and the millions of fish that have died there over the past years have never occurred before. Why only here and nowhere else?

4) According to a conference paper produced by the Ministry of Energy and available online, a variety of dispersants, degreasers and shoreline cleaners including Corexit 9500A were used. We are not clear what other chemicals were used by Petrotrin or in what quantities. Additionally, conference paper reports that that the mangroves which were impacted by the oil were purposely not cleaned.

6) The Corexit washed into the mangroves and up the Aripero River where it remains today. As we write, crab catchers are harvesting and selling crabs to unsuspecting consumers, and these crabs may also be contaminated since they are being harvested in the same Petrotrin prohibited “Red Zone” area. When the heavy rains come contaminated and dead fish wash down the Aripero River and out of the mangrove. Secondly, when the water is very rough we have increased fish kills/peaks in the carnage.

7) Several professionals have made public statements regarding the on-going fish kills, but these statements have been made without visiting the area. If these professionals took the time to walk along the 3 ½ miles of Pt. Sable Beach as we have done and continue to do they would have better direct primary and first-hand knowledge to verify what have reported.

8) The IMA research done into the E-coli bacteria in Speyside Tobago where the levels were recently 900 times above the safe limit set by the United States Environmental Protection Agency (US EPA), was caused by agricultural pesticide runoff which was killing the natural predators of the e-coli bacteria. The environment is deeply interconnected and the stressors on the environment in this location are numerous and this list of possible causes must be examined thoroughly and independently.

For example, Kaizen Environmental Services Trinidad Limited has a toxic waste discharge/treatment facility which operates in the area and it is possible that chemicals discharged from any operation in the LABIDCO industrial estate, or from the catchment area of the Aripero River, or even as far as Point-a-Pierre could be having a synergistic effect with other pollutants including the Corexit in the water causing a multiplier effect and resulting in these fish kills. All of these are possibilities we believe must be examined. Why is Government dragging its feet on this issue? If not Corexit, why is our government not investigating and treating the “real” cause?

9) We are not sure of the exact precise chemical or chemical imbalance(s) which is/are causing these on-going fish kills. What we do know as a matter of fact is that only in this Petrotrin prohibited “Red Zone” area where we know Corexit and other unknown chemicals were used are we getting these continuous fish kills of a wide range of species. This is no coincidence as some would want us to believe. There is a direct correlation between the use of multiple unknown chemicals and dispersants and the on-going and continuous fish, dolphin, crab and bird deaths.

FFOS respectfully and publically call on the EMA and IMA to abide by the principles of transparency and accountability embodied in the Aarhus convention to which Trinidad and Tobago are signatories, and to make public the methodology and results or all test taken since the 2013 oil spill. In particular FFOS openly challenge the IMA and EMA to make public the findings of the cause of death of the bottle-nose “flipper” dolphins of which samples were taken and a report was prepared by CARIRI. The Aarhus convention guarantees the right of everyone to receive environmental information that is held by public authorities, and as well as the right to participate in environmental decision making. The fishery stakeholders are entitled to see the results according to the principles of environmental law.
Why does the IMA claim to have lost the samples of the sick shark which was captured in Otaheiti in March of 2014? Where is the toxicology report of this and other specimens?
The National Environmental Task Force (NEATF) Report prepared in the aftermath of the 2013 Petrotrin oil spills still remains hidden from the public. The severity of the human health risks of the current situation requires transparency and open discourse on the possible cause(s). FFOS publically call on the EMA and the IMA to share this document so that our independent scientific team overseas can advise us on its content.
Finally, in closing, FFOS restates its position. We do not claim with any certainty that we have evidence as to what is causing the on-going and continuous fish kills in the prohibited Petrotrin “Red-Zone” area. The evidence that we have presented from our three years of first-hand experience, points to chemicals including the dispersant Corexit as being the most likely cause. We have repeatedly asked for the previously conducted investigations to be made openly available to the public and have been stone walled.
FFOS has addressed open letters to the EMA, the IMA and Ministry of Planning and Sustainable Development asking for copies of all the reports and analyses done in the prohibited Petrotrin “Red-Zone” area within 48 hours. Upon receiving same, FFOS will issue a full statement to the media.
We remain,
Forever yours in sustainable and inclusionary development,